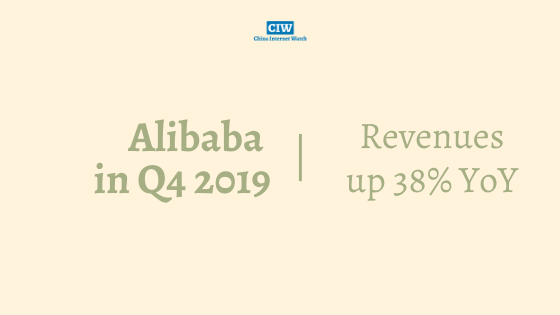 Alibaba’s revenue was RMB 161,456 million (US$23,192 million) in Q4 2019, an increase of 38% year-over-year. But, CEO warns that coronavirus “will present near-term challenges to the development of Alibaba’s business across the board.” Shares of Alibaba fell 2% in early trading following Zhang’s remarks.

Annual active consumers on its China retail marketplaces reached 711 million, an increase of 18 million from the 12-month period ended September 30, 2019. Mobile MAUs reached 824 million in December 2019, an increase of 39 million over September 2019.

Takeaway Has Become A New Revenue Driver for Starbucks Alibaba Tmall Double 11 Single's Day adverts
Comments
Your email will not be displayed.

Beginner's Guide On Baidu: How to Start Advertise on Baidu

The Importance of CDN Network in China and speed optimization methods

Jump into the Best Strategies for WeChat Marketing in 2021